TOP FABELS THE MONKEY AND THE DOLPHIN 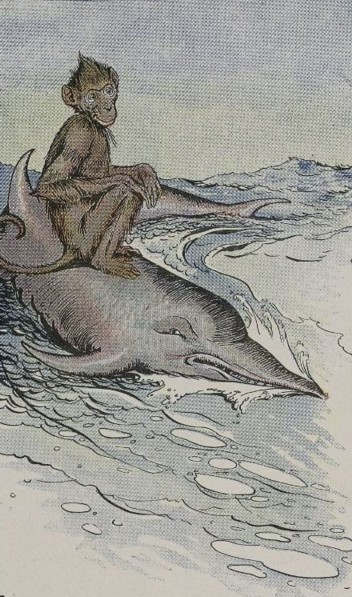 Author: Aesop, Illustrator: Milo Winter, Picture: Milo Winter
It happened once upon a time that a certain Greek ship bound for Athens was wrecked off the coast close to Piraeus, the port of Athens. Had it not been for the Dolphins, who at that time were very friendly toward mankind and especially toward Athenians, all would have perished. But the Dolphins took the shipwrecked people on their backs and swam with them to shore.
Now it was the custom among the Greeks to take their pet monkeys and dogs with them whenever they went on a voyage. So when one of the Dolphins saw a Monkey struggling in the water, he thought it was a man, and made the Monkey climb up on his back. Then off he swam with him toward the shore.
The Monkey sat up, grave and dignified, on the Dolphin’s back.
“You are a citizen of illustrious Athens, are you not?” asked the Dolphin politely.
“Yes,” answered the Monkey, proudly. “My family is one of the noblest in the city.”
“Indeed,” said the Dolphin. “Then of course you often visit Piraeus.”
“Yes, yes,” replied the Monkey. “Indeed, I do. I am with him constantly. Piraeus is my very best friend.”
This answer took the Dolphin by surprise, and, turning his head, he now saw what it was he was carrying. Without more ado, he dived and left the foolish Monkey to take care of himself, while he swam off in search of some human being to save.
One falsehood leads to another.
Share
WhatsApp
Facebook
Twitter
Pinterest

Akbar : Mughal Empire Akbar was one of the greatest emperors of the Mughal dynasty. It was during the reign of Akbar that the rule...
Read more
Akbar Darbar

Akbar : Mughal Empire Akbar was one of the greatest emperors of the Mughal dynasty. It was during the reign of Akbar that the rule...
Read more

Few quotes about success and quotes from famous people.Don't shrink your dreams. Super-size your courage and abilities.Just when the caterpillar thought the world was...
Read more
Albert Einstein quote

Great Inspirational quotes, we selected the most inspiring and motivational quotes and put all of them into this post. Enjoy in beautiful quotes and...
Read more
Albert Einstein quote

THE LION, THE ASS, AND THE FOX

THE ANT AND THE DOVE